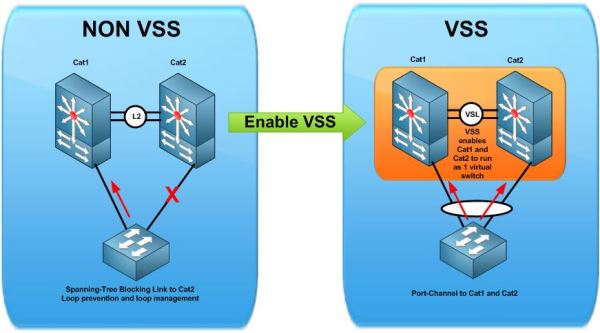 VSS has been around for some years now, but it allows you to virtualise Cisco 6500 chassis’s and morph them into a single, logical unit. Once configured your single switching system is known as a Virtual Switching System 1440 (VSS1440*).

The main benefits include operational efficiency, a single point of management/configuration and scaling of the system’s bandwidth, i.e. pooling the resources of two chassis’s.

VSS is made up of the following:

VSL’s can carry regular traffic in addition to the management comms between the two 6500’s.

VSL Links are required, however you will also want to configure fast-hello links – ideally a pair. These links provide dual active detection, i.e. if a disgruntled employee were to sever all the VSL links, the VSS would still be able to determine which switch is the active member. If these additional links are not configured you can end up with a split-brain scenario.

If the standby switch detects a complete loss of the VSL, it assumes the current active chassis has failed and will take over as the active member.

This is not to say your network will not have an outage, as if the VSL links were to be lost, the active switch (via the fast-hello links) will go into recovery mode. In this mode, ALL ports except the VSL ports are shut down until the VSL links recover and the switch will reload in it’s normal state.

I recently had an issue with a client where the VSL links were temporarily severed, and although we were running fast-hello links a split brain still occurred and caused a widespread outage. After the VSL links were re-patched and the switches rebooted, service was restored.

Troubleshooting this at the time, the switches did not reboot and recover automatically after the VSL links were re-established. I still ponder why…..